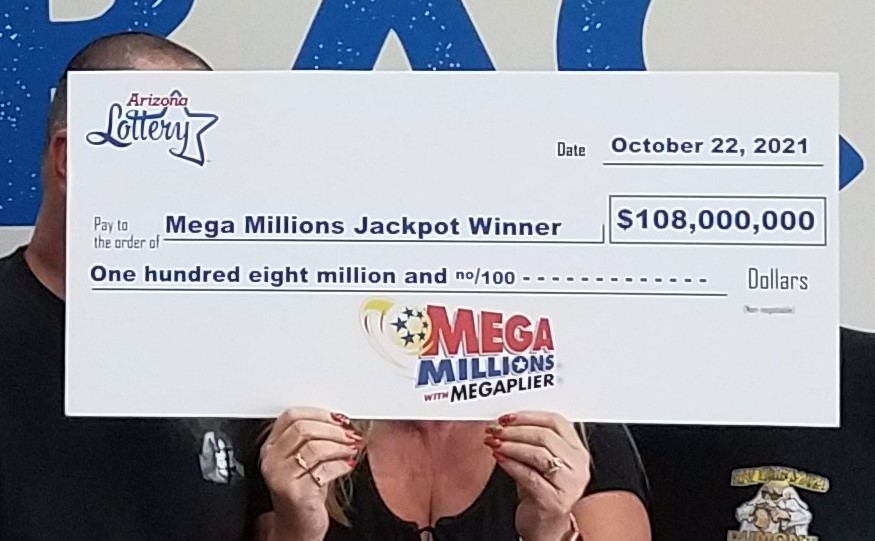 The $108 million winning ticket was sold at the Desert Martini bar, located at 2120 McCulloch Boulevard, North Lake Havasu City, Arizona, on October 20th. The trio is choosing to remain permanently anonymous, under a state law enacted in 2019.

The multi-draw ticket matched all six numbers in the Friday, October 22 drawing, winning only the second jackpot awarded in Arizona in the Mega Millions’ history! Desert Martini, our valued retail partner, is also receiving a $50,000 sales incentive from the Arizona Lottery for selling the winning ticket.

“We are so excited to see this family claim our second-ever Mega Millions jackpot.,” said Gregg Edgar, Arizona Lottery Executive Director. “The Arizona Lottery is all about doing more good in our state and making dreams come true for our players. I’m sure this amazing prize will go a long way toward helping make this family’s dreams a reality and inspiring many other Arizonans to dream bigger while doing good for Arizona.”

The three winners: a man, his wife and her brother, want to remain anonymous but they are happy to share their winning story. They say that every week they play $60 and their winning week was no exception. They chose a quick pick and one of the men checked their numbers after the drawing on the Arizona Lottery’s ticket checker in the Player’s club app when he discovered they had won. “I was jumping up and down and screaming!”

The trio say that they don’t have any big plans for the money and, for now, they’ll take it easy and buy a motorhome. They say they had plans to buy one anyway but now it will be a bit nicer and they’ll get it sooner. The woman of the three notes that, when the time is right, they will bid farewell to their jobs and see the country.

Another thing they say they’ll keep doing is playing the Lottery. The woman’s husband even jokingly asked the Arizona Lottery officials who were handling their claim to these millions if they would have to go through it all over again when they come back to claim next week’s Powerball jackpot.

In the meantime, the couple plans to pay off their mortgage, buy a new truck, help their kids and maybe take a cruise. The wife’s brother, a U.S. Navy veteran and avid amateur scuba diver, would also like to take a trip to the Maldives, but the 30-hour trip is daunting and he says he’s “too damn cheap” to travel anything other than commercial.

Though this win is enormous, it is just one of thousands of Arizona Lottery wins that are paid out to our players every week with our instant and draw games, our second chance Players Club (available for free on the iTunes® App Store and Google Play™) promotions, and our regular Facebook livestreams where no purchase is necessary to tune in and win!

It’s also important to remember that this lucky family are not the only winners of this life-changing prize, as every Arizona Lottery ticket sold helps fund more than a dozen vital programs across the state, including health, housing and job assistance for the homeless; support for Arizona’s foster children; funding to nurture and grow our state’s economy in a pandemic-challenged environment; and monies to augment efforts to preserve and protect Arizona’s iconic wildlife and habitats.

Enjoy the Thrill of Winning with New Scratchers Games!

Join the Players Club to sign up for emails and push notifications.